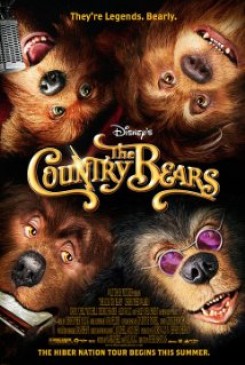 A young bear named Beary is adopted and raised by humans. Once Beary discovers the truth about his bear-itage, he sets out to Tennessee to find his birth family. Along the way, he helps unite the once legendary Country Bear Band for a benefit show to save the Country Bear concert hall.

Although the film does not feature real live bears, other supporting animals appear throughout. The Film and TV Unit of the American Humane Association (AHA) monitored the action sequences involving these supporting animal actors. The AHA has sole authority, through a contract with the Screen Actors Guild, to protect animals used in film and television.

Inspectors reviewed the script and action scenes before and during filming to ensure that animals were not harmed or mistreated and that AHA Guidelines for the Safe Use of Animals in Filmed Media were upheld. They also monitor conditions in which animals were housed during production.

Roadie, the Country Bear's tour bus driver, is often seen with his best friend, a pet chicken. Five chickens were on call for the part of Mr. Chicken, and a trainer instructed all of the actors on how to hold the chicken in a comfortable position. For scenes requiring wing-flapping, one of the chickens was a natural flapper and was used for these sequences.

In several scenes, Mr. Chicken rides in the bus with Roadie and the Bears, sitting in its personal basket located behind the driver's seat. Although the bus did not actually move, the basket was secured for the chicken's safety before filming began. In fact, all of the chicken's vehicle scenes were filmed in front of a green screen, ensuring that the bird never was in any real danger.

Mr. Chicken sits on the bus's engine flap as smoke pours out of the engine. A trainer placed the chicken on its mark and stood off-camera to supervise. The smoke was generated by a fog machine, while fans directed it away from the bird.

Roadie and the Bears attend a wedding at the Country Club. Mr. Chicken is there as well, pecking away on top of Roadie's table at the Country Club. Roadie picks up the chicken and carries it as he walks through the reception and talks to the Bears. A trainer scattered food on the table and placed the chicken next to it to eat. The actor held the chicken with great care and then gave it back to the awaiting trainer when the scene was over.

Roadie holds Mr. Chicken as he helps the Bears pack up the family van. A trainer handed the chicken to the actor and retrieved the animal afterwards. The bears and the chicken are then seen in various positions outside of the parked van. The trainer placed the chicken on the windshield, hood, door, and window of the van and removed it after each take.

Roadie is the drummer for the band at the big Country Bear reunion concert. Mr. Chicken enjoys the show from behind his pal Roadie as the band plays. The chicken sat on a fabric-lined perch while the nearby speakers were turned off so the chicken wouldn't become frightened.

The Bears' tour bus passes horses grazing in a field and several goats standing by the side of the road. The field was cleared of all debris and food was spread on the ground for the horses to munch on during their brief scene. The goats were tied to the fence that surrounded the field. As the bus pulls up in front of the Country Bear Concert Hall, chickens peck outside on the grass. A trainer scattered food on the ground and the chickens began eating.

As the barn doors open, several pigeons fly away and a pig trots out. The homing pigeons were released one at a time by trainers standing off-camera. A trainer released the pig from inside the barn and it ran to a another off-camera trainer, who rewarded the pig with plenty of treats.