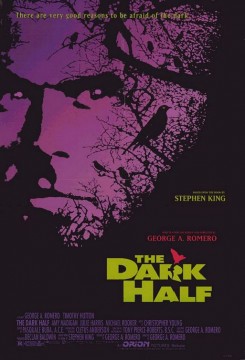 This film adaptation of a novel by Stephen King begins with a flashback to 1968 when a young boy, Thaddeus, undergoes surgery to remove a brain tumor. The "tumor" turns out to be Thad's unborn twin which his parents request be buried in the family plot. Simultaneously, thousands of birds take flight and fill the sky outside the hospital. The story then shifts to the present where an adult Thad, married, father of infant twins, and successful author, is lecturing to his class at a university. Afterward, a smarmy man approaches him and asks him to autograph a trashy, best-selling novel. When Thad refuses, protesting that he's not the author, the man persists that he is, and threatens blackmail. Thad is upset. Under his own name he's published respectable, critically-praised novels that had earned him a reputation, but that hardly paid the rent. However, under the guise of the pen-name George Stark, he has turned out lurid best sellers that have sold millions. Now that he's exposed, rather than submit to blackmail, he decides to go public in a big way, and, at the same time, bury George Stark...literally. In a photo story for People Magazine Thad stands in his family burial plot, with a shovel in his hand, before a phony gravestone marked George Stark. Later a large hole appears before the gravestone, with hand prints at the edge, as if someone dug themselves out of the grave. People are getting murdered and the police suspect Thad. Thad begins showing signs of schizophrenia and he begins hearing bird sounds in his brain. After one murder, a bloody message is scrawled on the wall, "The sparrows are flying again."

Thousands of birds are featured in The Dark Half. Rather than sparrows, mostly finches were used as they are stronger and more aggressive. Representatives of American Humane were present for both the training and actual filming of the birds. Housing conditions, including temperatures, were carefully controlled. Training consisted of exercise to build stamina. The birds responded to food, without depriving them of any, but by altering their feeding time. They were always fed inside a box so that they would look for the box and respond to it. Since finches are not very aggressive by nature, aggressive scenes were simulated using mechanical birds, special effects, or animation. As added protection for the birds when on the film sets, the rooms were netted. For outdoor scenes of large flocks of birds, documentary-style footage was filmed in Alabama in an area which has a large starling population. Apart from that, no birds were filmed outdoors. For the scene where the birds appear to be breaking through a wall, the wall was rigged to break away in small sections. Fake birds were attached to the top of a hammer device which broke through the wall. Real birds came through the holes that had been made in the wall and bookshelfs. The final dramatic scene with the birds was filmed in a series of quick cuts, using a blend of real and fake birds, special effects and animation. The real birds were filmed perching on a trainer who was lying on the floor. Some of the filming was reversed to give the effect of the birds lifting a man. This footage was superimposed with footage of birds flying in front of a blue screen to create the illusion of many more birds in the scene.