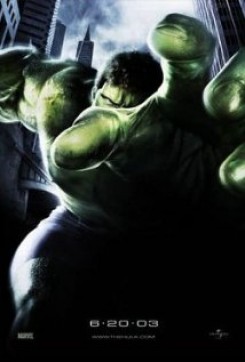 This live action drama is based on the classic Marvel Comic Book character, The Hulk, created by Stan Lee and Jack Kirby in 1962. Bruce Banner (Eric Bana) is a scientist who has no idea that his father (Nick Nolte), also a scientist, passed on a genetic mutation that can render him super powers. When Bruce is doused with gamma rays during an experimental debacle, the gene is activated. He finds that when he is angered, the results of the gamma rays transform him from a mild mannered scientist into a very strong, green, gigantic Hulk. The only one who can turn the irate green monster into a heroic figure is his love interest and fellow scientist, Dr. Betty Ross (Jennifer Connelly).

During his father's experiments in the 1950's, several animal species were used. The opening of the film sets the tone of the genetic experiments and shows the dissection of creatures such as a starfish, sea cucumber, and a lizard. It also shows close-ups of a monkey paw and other primates, one of which appears to be injected with a suspicious fluid. The animals that appear to be placed in harm's way were special effects creations as was the fake syringe used on the capuchin monkey. The live animals were supplied and attended to by professional trainers.

After a tragic circumstance separates Bruce from his parents and ends his father's work, Bruce grows up to become a scientist himself. He also has an interest in genetic-based research and utilizes animals for his studies. One particular frog is part of an experiment where it is placed in a bubble chamber, exposed to "nanomedes" and displays amazing powers of healing. The growths that appear on the animal's body were computer generated effects.

In several other scenes in the film, reptiles appear either in aquariums, in laboratories, and also on the hat of a character in the jungles of a third world country. These exotic animals were supplied and handled by a professional trainer specializing in reptiles, snakes, and insects. Some of the interesting species seen in the film include a Blue Tongue Skink, a Savanna Monitor, an Albino Python, Rhino Iguana, and a Water Monitor.

Animal actors supplied by professional trainers were used in other laboratory scenes and were placed as background atmosphere on the set. Again, several different types of animals were used and included rats, mice, rabbits, and guinea pigs.

After one of the experiments goes very wrong, Bruce begins to make angry transformations becoming a green hulk of a man. Before he actually knows what is going on, his estranged father returns to give him some frightening insight into why all of this is happening. Dad has three dogs that seem to accompany him everywhere, even to Bruce's hospital room. Unfortunately, Dad believes that Dr. Ross, Bruce's paramour, is too meddlesome for the good of the experiment. He succeeds in transforming the canines into Hulkdogs who are sent to attack Dr. Ross, but encounter the Hulk instead.

The dogs were handled by professional trainers and given verbal and visual cues to either stay on a mark or to move A to B. Several different breeds were used for the pack: a Poodle named Lili, Staffordshire Terrier Mix named Sammy, and a Mastif Mix named Smoke. The Hulkdogs were computer-generated super canines of the Digital Breed.

Don't Get Him Mad

Jungle guerillas have a very bad idea in that they decide to steal from a humanitarian outpost. Dare they anger the young man in the hat? To create the atmosphere of a jungle outpost, animals were used as extras. Several chickens, a parrot, goats, and donkeys were strategically placed to allude to the rural location. The animals were placed by their trainers and given food treats to keep them interested in staying on their marks.