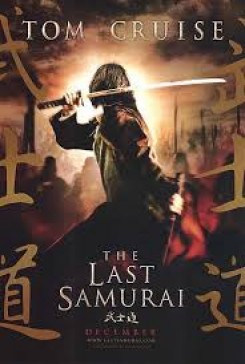 Set in the late 1800s, The Last Samurai chronicles the journey of Captain Nathan Algren (Tom Cruise), a disillusioned American war veteran recruited by the Japanese emperor to repress the rebellion of a group of samurai warriors, led by Katsumoto (Ken Watanabe). During his first encounter with the renegade army, the samurai capture Algren and hold him hostage in Katsumoto's village, where he will unexpectedly find his salvation.

The film dramatically enacted battle scenes that employ horses as historic war machines. These animals fall, rear up and even collide against each other amidst gunfire, swordplay and explosions. Farm animals enhance the atmosphere of a medieval Japanese village and horses pull carriages typical of the period. For a brief insert shot, a tiger was filmed against a green screen and later edited into the film during post production.

The Way of the Filmmaker

Creating the action sequences in which horses play an integral part required extensive preparation. The horses were trained and fortified like professional athletes. Months before filming began, trainers slowly and carefully taught the horses to do falls, rears and jumps later woven into the action of the battle scenes. Starting out with a select group of 30 horses, trainers continually evaluated them for temperament and behavior and identified the natural talents of each animal before deciding on a team of 15 that felt comfortable performing falls. Only those horses that excelled at the various stunts such as falling, rearing or jumping composed the elite final team. Experienced stuntmen worked with the horses and horse trainers to pace the animals and eventually perform on camera. For the various battle scenes, the production used up to 63 horses, including the stunt horses.

The horses also received extensive preparation to work around the special effects used in the film. Trainers worked with the special effects personnel and the armor crews to gradually condition the horses to a range of situations long before the cameras rolled. To reduce the noise and reverberations around the animals during gunfire scenes, quarter loads were used and many of the horses wore foam padded ear plugs. All atmospheric fire and fog was carefully controlled by the effects team.

In addition to the live horses, production had two very detailed and agile animatronic horses made for a thrilling sequence that appears to put two horses in jeopardy. When the editing team spliced together the animatronic and real animals to create the sequence, movie magic delivers images of peril without harming the live animals. The props department also created a small team of prosthetic stuffed horses to simulate those animals killed in battle.

Careful choreography and rehearsal ensured the safety of both soldiers and their horses in all of the battle scenes. Swordfights, archery and gunfire either from horseback or around the horses, were rehearsed as a dance would be — slowly graduating in speed and complexity. Paths planned and carved out of the terrain helped guarantee that the explosives and falls would happen in safe sequences and on prepared and sound footing. To prepare for the horse falls, strategically dug "falling beds" provided predictable, soft landing areas. For any of the battle scenes, especially in the forest locations, crew members cleared all paths of obstacles, uneven surfaces, exposed roots, and overhanging branches.

Experienced catch or pick up riders were especially necessary for saddle falls performed by the stuntmen. After a stuntman hurls himself out of the saddle, the riderless horse continues its run until safely collected by the catch riders at a point out of the camera range.

When outfitting the horses, costumers remained faithful to the cultural context and historical nature of the film. These costumes included extra foam padding under the saddles for added comfort. Makeup artists applied the cosmetic mud that appeared on the horses, and handlers continually washed and groomed the animals throughout filming.

Nathan and his men ride away on horseback as a Japanese village burns behind them. He leads the soldiers into the forest, where he lines them up to give orders. The men stay in alignment, poised to fight the oncoming samurai who charge towards them, also on horseback.

Nathan's army feebly fights the skilled and powerful samurai. Men are shot off their horses while other horses rear and crash to the ground. Suddenly, another horse rams into Nathan's, sending both rider and animal to the ground and pinning Nathan underneath the weight of the horse.

The samurai capture Nathan and lead him back to their village on horseback. They ride slowly up steep terrain with their hostage and Nathan observes the Yabauame archers practicing their technique on horseback. Japanese stunt riders portrayed these archers and had significant training in this form of archery. As Nathan slowly becomes indoctrinated in the philosophy and culture of the samurai, he also learns their art of war.

The samurai warriors ride into battle against the Imperial Army of Japan wielding torches and igniting fires and explosions. The forty horses who had pre-trained with experienced stunt riders performed the action in this intense scene. The special effects department ensured that the explosions and torches remained at a safe distance from the horses, but as an additional precaution, trainers also applied a fire retardant jell to the horses' coats. Although some horses appear wounded by gunfire, the special effects unit created the appearance of injuries through the use of carefully placed packets of blood called squibs.

The riders' swords and bayonets were made of plastic with blunted ends held pointed upwards, away from the horses. Wranglers trained the horses to run in defined lanes, and multiple cameras made the action appear chaotic and unstructured.

A bloody battle ensues, sending horses crashing to the ground. Huge explosions wrack the earth and several horses twist violently to the ground, while the ones still standing attempt to leap over the fallen. Dead horses and warriors scatter the landscape, and the props department used stuffed prosthetics for the equine victims. Each trained falling horse was limited to a maximum of three falls per day and given time to rest in between takes and for at least one full day following the shoot.

Honorably, no horses were harmed in the making of this film.