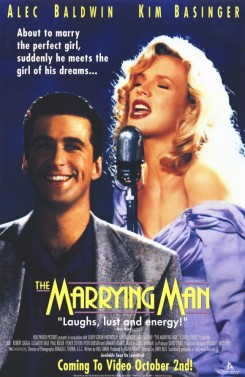 The Marrying Man is a refreshing romantic-comedy enhanced with musical numbers from the Golden Era of popular music. The story begins in the late forties when engaged, playboy-millionaire, Charlie is taken to Las Vegas by his buddies for one final fling. Charlie is reluctant to go because he thinks he's found his perfect match in his wealthy, socialite fiance. He's about to leave a nightclub and return to L.A. when Vicki steps into the spotlight to sing. Zing! He's smitten and must have her. He does, but unfortunately, right in the middle of their lovemaking, her boyfriend, Bugsy Siegel, walks in. For reasons of his own, Bugsy orders an emergency shotgun wedding for Vicki and Charlie. This seriously upsets Charlie's fiance and her powerful father. Although Charlie has the marriage annulled, Vicki is like a disease with him, and over a period of years, they marry and divorce numerous times before finally getting it right.

Most of the animal action has been edited down to a brief scene with two dogs on a porch. American Humane was on the set when the dogs were filmed and also when horses, chickens and cows worked and we are rating The Marrying Man "Acceptable".