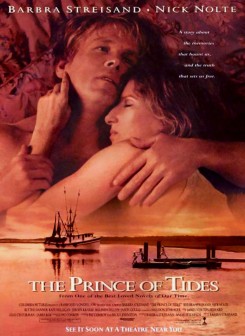 Prince of Tides, The

The Prince of Tides is the absorbing story of how the troubled childhood and destructive parents of a brother and sister nearly destroy their adult lives, until a wise and caring psychiatrist intercedes.

Tom has a lovely wife and children but has difficulty with his emotions. Whenever he is confronted with a problem, he either laughs it off or avoids it. When his unmarried sister, Savannah, attempts suicide, he goes to New York where she is hospitalized. He meets Savannah's psychiatrist, Dr. Susan Lowenstein, who asks Tom to fill in the details of their childhood in an effort to keep Savannah alive. (This was not Savannah's first attempt at suicide.) As Tom's sessions with Susan continue, a romantic relationship develops between them and Susan gradually unravels the secrets of a twisted childhood. Tom eventually faces his own personal demons and decides that, in families, there is no crime beyond forgiveness.

A family dog is seen at various times, either playing with children around the house or being fed from the table. Horses are primarily atmosphere in several scenes.

In a home movie sequence, a snake and a tiger in a cage are seen briefly.

In a brief scene set on his father's shrimp boat, Tom stands amid a pile of sea life, which has been spilled onto the ship's deck from a net. His children sort the sea life into baskets as a few small crabs are seen crawling about. This sequence was filmed on location off the coast of South Carolina on an actual shrimp boat with the regular crew present. The actors took part in what normally would be done, such as sorting the varied sea life into baskets. Then the regular boat crew took over and continued their regular process of preparing the shrimp and any other variety of fish for market.

Although American Humane had a local representative prepared to cover this filming sequence, the production company said that there would be no room on the small boat as they had to operate with a scaled down crew to make space for the camera, sound equipment and filming crew. We are not rating this film as there is no way we can know for sure whether fish and other ocean life died as a result of making this picture.