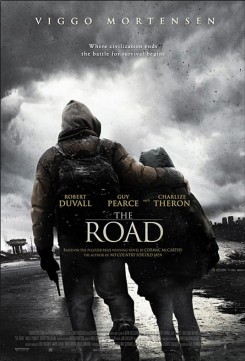 A man and his son wander the deserted post-apocalyptic countryside in search of food and shelter. They must rely on each other and their sense of hope in order to survive the elements, hunger and other survivors-turned-cannibals.

A man's hand is seen very briefly petting a horse's face close up. For this mild action, trainers stood near the horse while the well-rehearsed actor very briefly petted it. The horse was only filmed for a few moments and then returned to its daily activities. The outdoor area where they filmed the shot was secured and checked for hazards.

Due to late notification or limited resources, American Humane did not monitor any of the beetle or dog action.