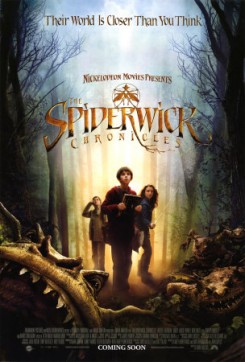 A woman moves her three children into a run-down estate -- the attic of which contains a book of secrets revolving around a mysterious fantasy world. When the siblings are transported to this hidden world, they embark on an adventure on which they encounter goblins, fairies and other fantastical creatures.

Insects and Lab Animals Inside a dark study, a man sits at a table surrounded by live and dead insects and animals in jars, under glass and on the table. He picks up some of these specimens and studies them. For this scene, the actor was not allowed to touch any of the live animals other than the tortoise and the skink, of which trainers instructed him on proper handling. Whenever he handled insects, they were fake props. The enclosed set was climate controlled. Considering the dangerous nature of some of the animals, such as the black widows and scorpions, the well-ventilated containers housing the animals were taped shut with two layers of tape as a precaution. Production provided documentation that the dead bugs and animals in the study were props. Cat Simon (Freddie Highmore) holds his pet cat in his arms. Later, the cat walks on the kitchen chair and Simon picks it up, holds it and pets it. Before filming began, the actor was introduced to the cat and was instructed on its proper handling. Trainers stood just off-camera during this mild action on the enclosed set. Miscellaneous Creatures The mouse-like character named Thimbletack, the giant snake and all goblins were computer-generated. Due to late notification or limited resources, American Humane did not monitor all of the cat and insect action or any of the snake, mouse and bird action.