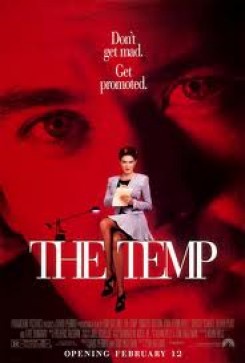 The Temp starts out as a subtlety humorous comedy, but turns into a suspense/thriller as Peter Dern, an up and coming sales executive, acquires a new temporary assistant. Lance, Peter's assistant, is out on leave for two weeks as he has just acquired a new baby in his family. Peter comes into work the next day, hurried and flustered since he was up most of the night trying to complete a major lay-out that is due. Upon his arrival he meets his new temporary assistant, Kris Bolin. Kris is very attractive and efficient. She immediately jumps into the unfinished project and they complete it together just before the dead line. As the two weeks are coming to an end, Kris has managed to completely control her surroundings and, is obviously a helpful, no, perfect secretary and assistant. Finally the day comes when Lance is to return, and although he has become quite dependant on Kris, Peter keeps his loyalties in check and tells Kris she must go. Kris proceeds to tell Peter that she won't actually be leaving as she is now going to be working with another one of the men on the staff, Jack, Peter's adversary. Before Kris has even moved all of her things out of Lance's desk, there is a blood-curdling scream that emanates from the copy room. It is the scream of Lance, who has just had his hand mutilated in the shredder machine. As tragic as it may seem, there is a bright side to this for Kris, as she can now stay on staff with Peter. As time passes, Kris keeps working her way up the corporate ladder, even surpassing Peter. This is not too hard to do though, as Peter is one of the last living top management people left. It seems that several have died in freak accidents as of late. In fact, it's been since Kris has come on board. Is there a connection? Peter sets out to find out, before he becomes another statistic

Animal action is minimal in this film. In one scene, as all of the top executives are having an outdoor power lunch, we see a wasp that has landed on the table and walks across towards Jack. Jack is terrified, as he is allergic to wasps. Kris stands up, raises her hand and smashes the wasp. This scene was shot in cuts. The wasp had been de-stung by a licensed Antimologist, which cases no harm to the wasp, and was placed on the table by the wrangler where it walked from point A to point B. When the actress brings her hand down to smash the wasp, the table had been padded and she actually cups her hand, allowing the wasp to remain just under her hand. In another scene we see a car that seems to be stalled in traffic. Peter, on his way to work, recognizes the car to be Jack's car. He gets out of his car and goes over to investigate, only to find Jack slumped over the steering wheel, dead. Peter pulls him back off of the wheel and, as Jack's head tilts back, his mouth falls open and we see a wasp crawl out of his mouth. A plastic mouthpiece was placed in the actor's mouth for this scene with, again, a de-stung wasp being placed in the mouthpiece. When the actor opened his mouth the wasp simply crawled out.