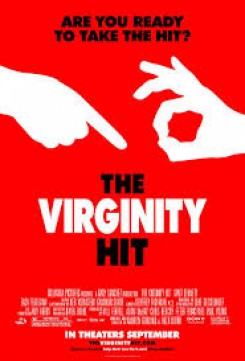 Several friends make a pact that they will smoke pot whenever each of them loses their virginity, but one man falls for a humiliating prank by a girl he met on the Internet.

A cow wearing red plastic cups on its ears is seen at a back yard party as partygoers talk. For this brief and mild action, a costumed trainer played the role of the man holding the cow by a lead rope. The trainer walked around the party a few feet along a well-choreographed path. The cow was unfazed by the empty plastic cups on its ears. All grounds were inspected for hazards and sets were closed and secured. The area was fenced, and several trainers stood nearby as a precaution.

At a party, a kangaroo sits on a man's lap while the man pets it, as other partygoers sit next to them. For this brief scene, a costumed trainer played the role of the man on the couch, and he and the kangaroo were comfortable with each other and with the action. The trainer fed the kangaroo while petting it. The kangaroo was unfazed by the party movement and noises, much of which was pantomimed or enhanced in post-production. American Humane also monitored additional kangaroo action, in which the trainer stood up and cradled the animal and another person fed the animal, but it was cut from the theatrical release.

The alligator seen swimming in a marsh was coincidentally caught on film in its natural habitat. The bugs seen in the Audubon Insectarium were also filmed in their natural environment as part of the location, and were not manipulated in any way.

Due to late notification or limited resources, American Humane did not monitor any of the elephant, horse, chicken or puppy action.