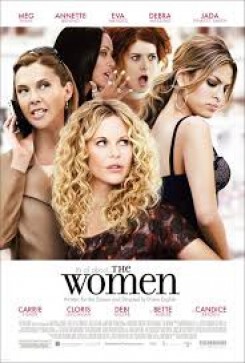 Mary (Meg Ryan), Sylvia (Annette Bening), Miriam (Jada Pinkett Smith) and Edith (Debra Messing) are best friends who look out for each other and share an unbreakable female bond. When one of their husbands has an affair, the women stick together like sisters.

Mary (Ryan) and Sylvia (Bening) each have a pet dog that appears in various scenes throughout the film. A golden retriever named Luke played the role of Mary's dog, Lucy, and a schnauzer mix named MuMu played the role of Sylvia's dog, Aretha. Before filming, cast and crew members were introduced to the animals and instructed on their proper handling. For any scene in which Lucy is sitting or standing near people, walking through the house or yard, or jumping onto or off of the bed, off-camera trainers verbally cued the dog to perform this mild action and rewarded and rested him immediately after. For scenes in which someone holds Aretha or hands her to another person, the actors were instructed on the proper way to hold the dog and trainers stood nearby as a precaution. For the shot in which Sylvia very briefly sets Aretha on a salon counter so the receptionist can pick the dog up, the actors were well-rehearsed on how to make this quick exchange.

Aretha and a poodle are seen in separate shots being walked down the sidewalk on leashes. At a cross-street, the dogs encounter each other and bark at each other. They then stand on their hind legs while their front paws appear to "box" at each other. Trainers handed the actors the leashes moments before filming began and instructed them to walk the dogs. Once the dogs met, trainers cued them to "speak" and to playfully "get" the other dog. The actors made exaggerated wrist movements, causing the leashes to appear to abruptly twist and jolt, therefore making the confrontation appear aggressive. While in this play mode, the dogs stood on their hind legs and "wrestled," while trainers stood nearby waving toys and exciting the dogs.

While Mary drives up to her house, Lucy's head is sticking out the car's window. Mary parks, then lets Lucy out of the rear car door. Lucy jumps out and walks into the kitchen, putting her front paws on a chair and grabbing a large piece of cheese in her mouth. This scene was filmed in separate shots. The dog was never in a moving vehicle. Moments before the actress came to open the cardoor, trainers placed Luke the dog in the backseat of the stationary car and cued him to stay. Once Luke was let out of the car, an off-camera trainer cued him to "come" and then moved him into the house for the next part of the scene. Trainers called the well-trained dog to the kitchen table and cued him to put his paws on the chair and "get" the cheese. The chair was weighed down with sandbags and the table was secured with added reinforcement, as a precaution. The dog was trained to not eat the cheese, which had been sprayed with a nontoxic bitter apple deterrent.

For the scene in which Aretha hops up and down next to the buffet table, as if trying to get a better look at the food, an off-camera trainer stood on a ladder next to the table, cuing the dog to "hop" straight up and down several times in a row. The dog was kept a safe distance from the table, which contained prop food and dishes. The dog was rewarded and rested between takes.