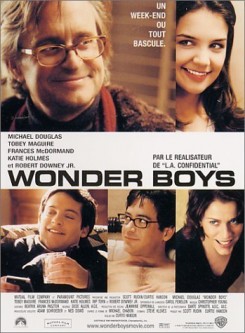 Wonder Boys is the story of Grady Tripp (Michael Douglas), a college creative writing professor and author who had written a blockbuster best seller in the past but is now unable to finish his current opus. His life appears to be falling apart: his latest wife has left him; his lover, Sara Gaskill (Frances McDormand) is pregnant with his child; and one of his students, James Leer (Tobey McGuire), a gifted but moody student with a fixation for death, has become enmeshed in Tripp’s life. The story includes several other colorful characters and the complications that arise when Leer shoots and kills Poe, the dog belonging to Sara’s husband.

The first animal appears early in the movie when Tripp and his literary agent, Crabtree (Robert Downey, Jr.), attend a party at the home of the school’s chancellor, Sara Gaskill. Tripp’s presence arouses the dog, Poe, to angry growling. Because the dog is supposed to be nearly blind, it has been fitted with soft contact lenses to create the impression of blindness  but allows the dog 50% vision. The dog and his identical double, were conditioned to the contacts in pre-production and had no discomfort wearing them.

The two dogs, identical American Bulldogs, have worked together in several films, including Homeward Bound: The Incredible Journey.

At the party Poe is seen making his way through the crowd of people and sniffing each one. This effect was achieved by conditioning the dog’s behavior with the use of a food trail on the floor during rehearsals. During the actual shooting, the trainer gave the dog verbal and visual cues.

A highly dramatic moment occurs when Leer and Tripp are in the chancellor’s bedroom, looking at some Marilyn Monroe memorabilia. Poe enters the room, growling at Tripp, then lunges at him, grabbing his leg and pulling him down to the floor, savagely biting Tripp’s ankle.

No actual violence occurs here. Rather, the actor and his stunt double have a removable food-covered sleeve on their ankle. The dog had been trained to chase and grab the sleeve. What appears to be Tripp’s leg is actually the removable sleeve in the dog’s mouth.

Leer takes out a pistol and appears to shoot the dog To create the effect that the dog is dead, the trainer cues the dog to lie down, fall onto his side and play dead. What the audience sees as a dead dog is actually an identical artificial animal or “stuffie”. Adding realism to this scene is the bullet wound. A prosthetic made of fur-covered wax is used and under the prosthetic is makeup that looks like a bullet wound. This is applied to the actual dog. Henceforth, all scenes featuring Poe are portrayed by the “stuffie”, not a live animal.

There is one additional “live” dog in the film…a large Newfoundland who is seen arriving home from a car trip. The dog gets out of the back seat of the car and subsequently is seen sniffing the trunk of Tripp’s car after Poe’s body is placed in it. For this scene the dog was given verbal and visual cues to place its front paws on the trunk and bark on cue.