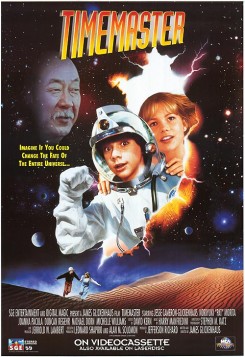 Timemaster is a story based on the principal that there is no past or future, but only now. The past and future are only an illusion. Using time travel in Virtual Reality games, Jessie and his sister, Veronica search to find their parents who are lost in the past.

In the beginning of the film we see that a small village near Yellowstone is being attacked by a spacecraft, dune buggies and men on horseback. The men on horseback are shooting guns and the spacecraft is dropping bombs. For these scenes, quarter loads were used in the guns and cotton was placed in the horses' ears. We also see a horse that falls during an explosion. To accomplish this scene, preparations were made in advance for the fall. A pit of about twenty square feet was dug and all the rocks and rough clods were removed. The ground was softened by adding sand and other materials. The horse was a trained falling horse and knew exactly what to do and how to fall. For the explosion, cotton was also placed in the horse's ears, and only a small amount of explosives was used. For the rearing horses, camera angles created the height that they reared. In reality they only reared two to three feet. They were trained rearing horses and used to rearing on cue. For the scenes with the chickens, when Jessie crashes into the barn, the chickens come running out. To accomplish this scene, a trainer released the chickens in the barn and they ran to another trainer outside and off camera, who had food waiting for them.