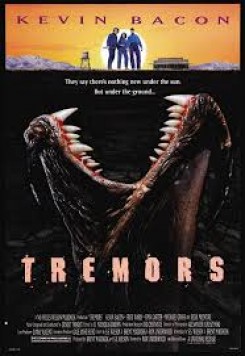 An isolated desert community experiences strange rumblings in the earth and at first the tremors are thought to be small earthquakes. Sheep in their pen appear restless and are later discovered slaughtered with little left of their bodies. Then people disappear and their bodies are found savagely mutilated. The townsfolk are mystified and their terror increases when they learn that the cause of the bloody mayhem are grotesque monsters of lightning speed who live beneath the ground. The only road over the mountains is blocked and there appears to be no escape from the monsters as they rely on vibrations to stalk their prey and then suck them underground with their tentacles. When two men attempt to leave town on horseback, a monster attacks one of the horses, wrapping its tentacles around the horse and wrestling it to the ground where it's devoured.

Meat parts purchased from a butcher were used to simulate the mutilated sheep. To simulate a monster attacking the horse, fake tentacles were wrapped around the horse. The movement of the tentacles was achieved by an inner mechanism which was operated manually. The horse was not at all frightened by this. The horse then laid down, which he was trained to do. Collapsible stirrups were used to protect the horse. A veterinarian sedated the horse briefly and an AHA representative was present at all times. A prop of fake horse flank was used where the monster bites into the horse.