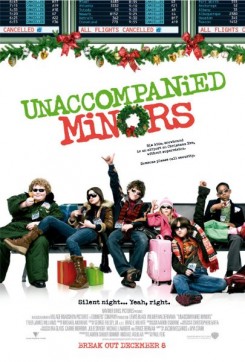 A Christmas Eve blizzard grounds a ragtag group of kids at Hoover International Airport who are trying to make it home for the holidays. Over the course of the day and evening, the five unaccompanied minors drive stodgy airport official Mr. Porter (Lewis Black) and gullible security guard Zach Van Bourke (Wilmer Valderrama) bonkers. But eventually, the kids learn that it’s not where you spend the holiday, but with whom you spend it.

When a group of airport employees taking a break in the baggage claim area teases a crated dog by waving food in front of it, Spencer (Dyllan Christopher) sneaks up and lets the dog out of its carrier.  The animal then goes after the workers, biting their behinds while barking up a storm.

American bulldogs Gangster and Blitz of Cheaper by the Dozen fame were used interchangeably to play this part. Carpet laid on the tile floor provided better footing for this well-planned stunt, and the crate was lit from the side of the carrier rather than from within to avoid overheating.

The action was achieved in multiple cuts; a trainer cued the bulldog’s seemingly aggressive barking while it was inside the crate. For the chase shot, the handler released the dog on “action” and it leapt into frame and “bit” the actor’s backside. In order to avoid startling Gangster or Blitz with the noise of a falling suitcase in one shot, American Humane’s Certified Animal Safety Representative suggested a pad be placed under the luggage to mute its fall. Both dogs were rested and watered between takes.

American Humane did not monitor the mild scene with a cat at a Christmas tree farm. We did receive outtake footage of preparatory work on a squirrel that sits on a barrel nibbling on a wire in one shot. After screening the finished product and cross-checking the animal action supervised during production, we acknowledge that the filmmakers have cooperated with our process.