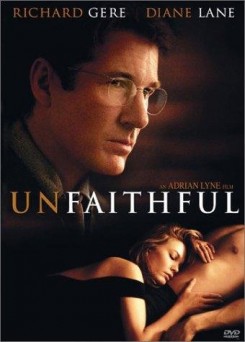 Murder and mystery ensue when a husband (Richard Gere) discovers that his wife (Diane Lane) has been having an illicit affair.

Poppy the Pooch The family dog, Poppy, was played by a 3 year-old female Terrier mix named Frankie. Whether the dog is following a family member or lounging around, the trainer put the dog on its mark and stood off camera using a combination of verbal cues and hand signals to achieve the action. In one scene, the dog pushes its food bowl across the floor, cueing its owner to fill it up. The trainer put dog treats inside the bowl and placed it in front of the dog. The bowl was outfitted with tiny ball bearings on the bottom to help it glide across the floor. On cue, the dog pushed the bowl across the floor and ate the treats off camera. In another scene, as the police question the husband and wife on the porch of their house, their son and Poppy are in the background curiously investigating the police car. Frankie wore a leash that the young actor held as he led the dog around the car. Birds, Ducks & Seagulls Birds fly in the sky as two men converse on a bench. Ducks are also seen swimming in the lake near the family house. The ducks and birds were filmed in their natural environment and were not hired animal actors. At a dumpsite, as a machine pushes garbage into a pile, more and more seagulls accumulate on the scene, flying overhead. Filmed over four days, the seagulls were naturally attracted to the dumpsite and were filmed merely flying overhead.