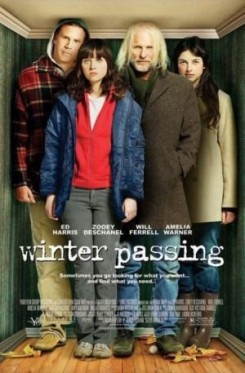 A $100,000 incentive from a book editor leads struggling actress Reese Holden (Zooey Deschanel) home to Michigan to persuade her reclusive novelist father, Don (Ed Harris), to publish the love letters he wrote to his revered late wife. To her surprise, Don now shares his home with two unlikely housemates—an amateur musician and an ex-grad student—and seems to care more for these new “family members” than he does for his own health and well-being.

American Humane’s Film & Television Unit did not monitor all the animal action in this film. Winter Passing is a Screen Actors Guild (SAG) production,  and therefore it was required to provide American Humane’s Certified Animal Safety Representatives on-set access whenever animals were used. However, due to limited resources and/or scheduling conflicts, the Film & TV Unit was unable to directly supervise all scenes in which animals appeared. The production provided a pre-release screening of Winter Passing, but since American Humane was unable to witness all the animal action firsthand, the film has received a Not Monitored rating.

Safety Representatives monitored a scene in which a deer walks up to Reese as she sits near a lake reading some of her mom’s old letters. Two trainers led the deer to the set on a leash. One trainer placed some food near the actress, who was introduced to the deer before filming began and also given instructions on how to handle the animal. The leash was removed right before filming began, and the deer walked up to the actress and allowed her to pet it. Both trainers stood off camera, and the deer was retrieved immediately on cut. This footage was edited out of the theatrical release but may reappear in the DVD version.

Production did not notify American Humane regarding the scene with a kitten that is put into a backpack and tossed into the river; we have no information on how that action was achieved.