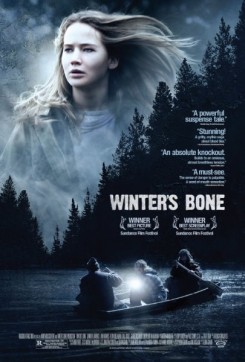 An unflinching Ozark Mountain girl hacks through dangerous social terrain as she hunts down her drug-dealing father while trying to keep her family intact.

Winter’s Bone is a Screen Actors Guild (SAG) production, and therefore it was required to provide an American Humane Association Animal Safety Representative™ on-set access whenever animals were used. However, due to limited resources and late notification, American Humane’s  Film & Television Unit was unable to directly supervise all scenes in which animals appeared. The production company did provide a pre-release screening of the film, but since American Humane could not witness the animal action firsthand, the film has received a Not Monitored rating. Animals in the film included a kitten, dogs, donkey, horse, ferret, cows, chickens and baby chicks and a scene of some squirrels being cooked and one sliced open.