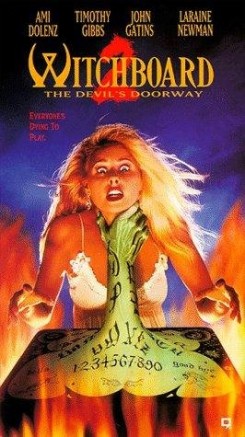 Pretty young Paige, an accountant, rents a loft-style apartment in a converted warehouse where she can pursue her dream of being an artist. The neighborhood is seedy and the building has been divided into apartments. The other tenants are suitably offbeat such as Elaine, the landlady, a former hippie who is mentally stuck in the sixties. Paige has just broken off with her boyfriend Mitch, a policeman, who was inclined to bully the submissive Paige. Mitch pays a visit and lets Paige know he is very unhappy that she has moved out. When he appears to be a little too menacing, Russell, one of her neighbors, intercedes and gets Mitch to leave. While Paige explores her new apartment, a Ouija board drops down from a closet shelf and Paige begins to converse with it. A Ouija board, sometimes called a witchboard, has the alphabet on it and is used to seek spritual or telepathic messages. Through the board she gets to know the sexy and tough former tenant of her apartment, Susan. Susan says she wants to help Paige but strange and horrible things begin to happen in the building. The first incident occurs when the handyman is alone in the basement and is attacked by self-propelled knives. He tries to flee, but the boiler explodes, killing him. Then Paige, until now a shy doormat type, begins to take on a new tough persona. She becomes more and more curious about Susan and asks Mitch to explore police records to find out how Susan died and if she really is dead. Together Paige and Mitch try to unravel the mystery of Susan's disappearance. As they do, more deadly incidents occur as Susan fights to take control of Paige.

Elaine's constant companion is her small terrier Doo. He is seen at various times either in her arms or on a leash, or lying on the floor nearby. At one point, he barks to warn her of imminent danger as a wrecking crane ball swings in her direction. The ball kills Elaine as Doo runs off barking. This scene was shot in cuts with the dog filmed separately. The dog, who was on leash, was never in any danger and was controlled by the trainer or actress at all times. The dog was not fearful, but was responding to hand signals with food as a reward. One night Paige, Mitch, and Russell go to where the Ouija board has told them Susan's body is buried. They hear the sounds of someone or something following them. Mitch fires his gun into the darkness and then holds up what they thought was stalking them. It turns out to be a dead raccoon. This scene was shot in cuts. The sounds of Mitch's gunfire is heard as he shoots the gun off- camera. What he holds up is a taxidermied raccoon which was rented from a prop rental house.