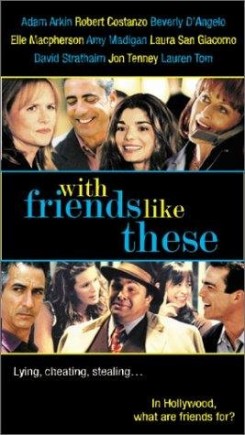 With Friends Like These is a comedy about four desperate actors who are friends, yet who risk loyalty for the sake of a part in a film.

When the acting role of a career is up for casting, each of three friends beg the advice of their mutual friend and fellow actor, Armand. As each actor separately leaves Armand's house, they encounter his German Shephard. The dog barks and growls at each one until they give the dog their "Capone" stare. The dog quiets down and is then petted. For this scene, a trainer placed the dog on his mark and gave the verbal commands to bark and growl.