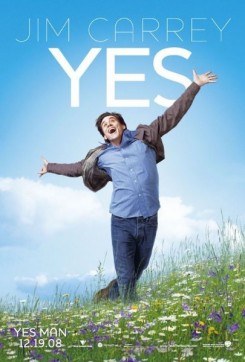 Carl Allen says “no” almost any chance he gets. But when he becomes too bored and lonely to stand it anymore, he gets roped into attending a “Just Say Yes” seminar, which mandates that he must say “yes” to any opportunity that presents itself, no matter how dangerous or ridiculous.

As Carl (Jim Carrey) is walking along a driveway, a black cat startles him and runs behind a parked van. For this brief and mild action, one trainer released the cat at its starting mark and another trainer stood at its end mark behind  the parked van, using a buzzer and food reward to get the cat to come. The cat was retrieved and placed in its crate immediately after filming.

A German shepherd runs to the end of its chain forcefully and growls at Carl, whose face is inches from the dog's face. The dog then shows its teeth and barks. This scene was filmed in separate shots. Trainers equipped the dog with a sturdy harness (not a collar) attached to a chain, which was secured to a wall. The dog was specially trained and accustomed to portraying aggression. Trainers cued the dog to move to the end of its leash toward the well-rehearsed actor and to growl. For the close-up of the dog barking and snarling, the dog and actor were filmed separately, and the dog was cued to bark and snarl.