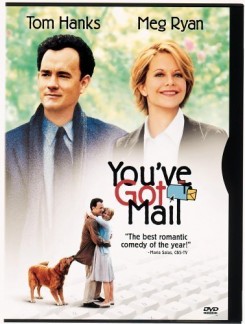 You've Got Mail is an adaptation of the 1940 classic The Shop Around The Corner. In this updated version, Joe Fox is the owner of a chain of bookstores. Unwittingly, he falls in love with Kathleen, whom he met in an Internet chat room, not realizing that she is the bookstore owner that he is presently trying to put out of business.

Joe's dog, Brinkley, is seen throughout the film performing various behavioral stunts. In several scenes, Brinkley is lying on the floor around Joe's desk as he chats with Kathleen on the internet. He is seen walking A to B from one room to another or being walked on his leash in the park, at the fair, or down the street. For all of these scenes the dog was placed on his mark or handed to the actor and cued by his trainer with verbal or hand commands.

In one scene, while Joe is sending E-Mail, Brinkley jumps up and places his paws on the desk and Joe pets his head. A trainer released the dog to a second trainer who was standing near the desk. The dog was cued with a verbal command to jump up and then to lie down.

Other dogs are seen in the film being carried by their owners or walked on leashes through the fair grounds. Two goldfish are seen being carried down the street in a plastic bag, and some pigeons fly away as Kathleen walks into the park to meet Joe.