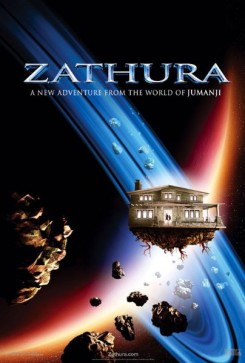 Based on Chris Van Allsburg's best-selling children's book of the same name, this sci-fi adventure takes brothers Walter and Danny Budwing for a wild ride into outer space with a mysterious board game found in the basement of their house.

Danny's (Jonah Bobo) pet gerbil, housed in a blue wire cage, appears throughout the film as the boys play this intergalactic game. When the brothers come under attack in various scenes, Danny often grabs the cage and carries the gerbil with him to safety.

In each of these instances, the director filmed an establishing shot of the real gerbil in its cage. The animal was not in the cage when special effects were used to make it seem as though objects were falling all around them. When Danny ran with the cage, or the cage slid against the fireplace, a fake gerbil replaced the live rodent.

A small group of "space goats" also appears in one scene, first standing in place and later moving through the spaceship's portal door. Trainers used clickers to call these Angora goats through the portal door and into a pen off screen. The trainer also used a clicker to direct the gaze of one goat to Danny. This shot was later enhanced with computer generated imagery (CGI) to create the four-eyed effect.